Hapoel Tel-Aviv, a team from Israel, has managed to take 5 points from their first appearance in the Champions League. Last year Maccabi Haifa played in the Champions League and came up with 0 points and 0 goals. This year, Hapoel Tel-Aviv gave one of the most amazing campaign of an Israeli team in Europe. Yes, they started with loses to Benfica away, Lyon at home and Schalke at home, but boy oh boy what they've done since.

They tied 0-0 with Schalke at home.

They beat Benfica 3-0 (!!!) at home in one of the most amazing games an Israeli team had ever had in a European competition.

And today, Lopez scored for Lyon in the 62 minute, but then Sahar scored an equalizer at the 63 minute! Then Zehavi scored the most amazing goal so far in this competition so far and Hapoel were leading 2-1. I was shaking and crying, literary.

They managed to keep the lead until the 88 minute when Lacazette equalized. ): If we'd won we'd have go to the Europa League because Benfica lost to Schalke. We're so close. ):

With all the pain of not winning this game and going to the Europa League, Hapoel Tel-Aviv were amazing in this campaign.

yunhaiiro) have done an Spanish transcription and an English translation of the show Conexión Samanta about the Spanish NT. (Posted here on

And here is the link to the subtitles' download in Megaupload. It's a .rar with both subtitle files, in .srt format.

Here is a mirror in Box.net, it only has the English translation file. If someone has a problem downloading from Megaupload, try this one =)

(Sorry about the post-telegraph, I'm not inspired today xD)

Mods, I wasn't sure about the tags, so if anyone else is needed just tell me.

(So, how many footballers' WAGs are having babies this year/next year? I'm losing track)

so the 3-3 draw yesterday was a little different. 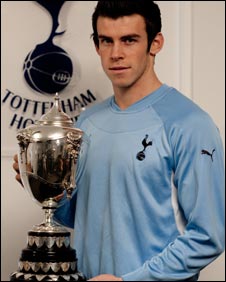 Tottenham Hotspur star Gareth Bale has been honoured as the 2010 BBC Cymru Wales Sports Personality of the Year.

The 21-year-old succeeds fellow Welsh footballer Ryan Giggs and was presented with the award by Spurs great Clive Allen at Tottenham's training ground.

And guess what I saw that made me flip the fuck out???

I realize it might be hard for some haters to stay pressed so I'm considering getting some people a Christmas/Hanukkah present.

Diageo's flagship Smirnoff brand has launched an above-the-line campaign featuring three stars of Manchester United playing a surreal game of football above and below water.

The ad, created by JWT Sydney and shot in Manchester using 3D technology, features Rio Ferdinand, Ji-sun Park and Ryan Giggs playing a bizarre form of football before a Smirnoff bottle emerges from the water. It ends with the words "Discover Extraordinary Purity".

It is launching this month (December) across the Asia Pacific region on TV and digital media.

Ingrid Tatham, Smirnoff regional brand manager, said: "Manchester United has a huge following and really resonated with our Smirnoff fans in Asia, we are excited to create a dynamic and engaging new campaign for our customers to interact and take part in ."

"Asked how his Arsenal teammates reacted, he said: "Some congratulated me, others could not hide their disappointment. Jack Wilshere was really upset. "He told me his dream was to raise the golden cup above his head in England in 2018."

I added videos to the two posts I previously made, but as I know the problem with checking back (I never do so either), have a new post. I'll include all uploaded videos.

I'll throw in a new Basti video as well.
And translations for the baby Manu and Basti video.

(Sergio totally covets that top.)
It's a little-known fact that Didier Drogba actually returned to Marseille before today. In fact, he was there over the summer, shaking his sexy, jeans-clad self all over their subways, billboards, and ... large buildings.

TBH, the whole thing was just a really cruel tease for people in Marseille who dream of him coming back. Clearly, they hadn't heard that "The personality of the warrior Drogba -- to look sleek and urban -- is perfectly suited to the spirit of the brand Kaporal 5."

Sport.co.uk can confirm that Manchester United and Patrice Evra’s representatives will sit down to discuss extending his current Red Devil’s deal in the summer.

The player’s chief representative told Sport.co.uk in an exclusive interview that his client was very happy at United and was eager to sit down in the close season to discuss a new deal at Old Trafford amid reports that Real Madrid were planning a raid on United in January.

The ease with which Javier Hernandez has settled at United has often been remarked upon in the early stages of his career at Old Trafford.

The Mexican’s level-headed attitude and undoubted talent are certainly partly responsible for that, but he’s also cited United's close-knit community for helping him feel at home.

"In spite of the pressure of being at a big club of the stature of United, when you’re part of that club it’s like a big family," the striker said.

"From the backroom and coaching staff to the cooks, everyone at the club treats you the same. We all get on and everyone gives you a slap on the back and encourages you.

"There have been players like that in the past. You think of Denis, for instance, who had that ability, and Ian St John at Liverpool. He (Chicharito) has a marvellous spring."

This leads me to 2 questions: 1) how awesome is Patrice and is there anyone who thinks we should sell him and go for Fabio C even with the other Fabio?, 2) how awesome is Chicharito on a scale of 10-10, 10 being most awesome?