Sir Alex Ferguson's jubilation over Dimitar Berbatov's late winner in Manchester United's 3-2 defeat of Liverpool was followed by the provocative claim that his side should have won by a "cricket score".

United lost a two-goal lead, with Steven Gerrard scoring twice for Liverpool, and looked like they were going to surrender a winning position for a third successive league game until Berbatov completed his hat-trick five minutes from the end of normal time.

"At 2-0 it could have been a cricket score," Ferguson said. "Two-all was an absolute farce. It was a game we absolutely dominated and I was saying to myself, 'It could be 10.' So when it looked like ending 2-2, it would have been a travesty of a scoreline.

"They [Liverpool] had the momentum when it went to 2-2, but they never offered anything, did they? They had to depend on decisions from the linesman to get back into the game. [Edwin] van der Sar hasn't had a save to make, [Paul] Scholes was controlling the tempo in midfield and we looked dangerous up front, with Berbatov and Nani in particular. I couldn't see us losing the game."

Ferguson accused the Liverpool striker Fernando Torres of trying to get John O'Shea sent off in the challenge that led to the free-kick from which Gerrard scored his second. "I've watched it and Torres made a meal out of it," he said. "He made an absolute meal of it to try to get our player sent off."

In 36 years of management Ferguson has never lost a match in which his side have been two goals ahead. His remarks yesterday will be a lesson for Roy Hodgson, that the United manager seldom misses an opportunity to belittle his rivals. 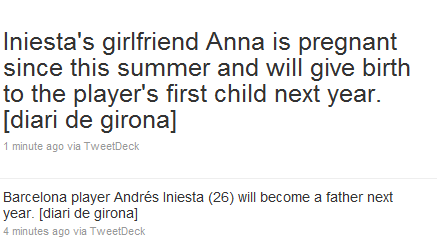 Manchester City boss Roberto Mancini has revealed he is willing to let goalkeeper Shay Given leave in January.

Following his late clumsy tackle on Barcelona’s Lionel Messi, Atletico Madrid’s red-carded defender Tomas Ujfalusi has come out to apologize to his victim.

The U.S. Men’s National Team will travel to South Africa to take on 2010 FIFA World Cup hosts South Africa on Nov. 17 at the magnificent Green Point Stadium in Cape Town. Kickoff time for the match to be broadcast live on ESPN2 and Galavision will be announced in the near future. Fans can follow the match live on ussoccer.com’s MatchTracker or at twitter.com/ussoccer.

The U.S. will be returning to South Africa for the first time since the 2010 FIFA World Cup, where they finished in first place in Group C ahead of England, Slovenia and Algeria before going out in the Round of 16.

“We are honored to once again be invited to participate in the Nelson Mandela Challenge Cup,” said U.S. head coach Bob Bradley. “The experiences in South Africa the past three years were a critical component of our team preparations for the 2010 FIFA World Cup, and we will use this opportunity as part of the process of building for the next four year cycle. We are excited to have the chance to see so many of the great friends we made during our visits there.”

The teams have met twice in their history, the United States collecting victories in both encounters. The USA will be competing in its second Nelson Mandela Challenge Cup, the first appearance coming three years ago to the day. In the team’s inaugural visit to South Africa, Steve Cherundolo scored the game’s only goal and Jozy Altidore made his full team debut in the 1-0 victory. In their only other meeting, the U.S. beat South Africa 4-0 on June 3, 2000,in Washington, D.C. Cobi Jones tallied twice that day, with Earnie Stewart and Claudio Reyna rounding out the scoring as Kasey Keller earned the shutout.

Combined with the 2009 FIFA Confederations Cup - in which the United States reached its first final of a major FIFA competition after defeating No-1 ranked and current FIFA World Cup Champion Spain in the semifinal - the U.S. will play its 11th game on South African soil in three years.

fuente
OMG so much USMNT in the next couple of weeks I'm so exited!

Arsenal Manager Wenger Is Charged With Improper Conduct at Sunderland

Arsenal coach Arsene Wenger was charged with misconduct by English soccer’s ruling body today over his behavior in the 1-1 Premier League draw at Sunderland two days ago.

He’s accused of “using insulting and/or abusive language and behavior amounting to improper conduct” in his contact with match officials, the Football Association said on its website.

Arsenal conceded a goal to Darren Bent in the fifth minute of injury time and lost the chance of going top of the league. It’s now second, four points behind Chelsea, which beat Blackpool 4-0 yesterday.
( Collapse ) Dubai: Former France midfielder Zinedine Zidane has been appointed ambassador for Qatar's attempt to host the 2022 World Cup, said the Gulf Arab state's bid committee.
Qatar's bid is one of nine for the finals but their main opposition is likely to come from Australia, Japan, South Korea and United States.
"Football is for everyone," Zidane said in a statement. "When I think of all the youth of the Middle East, what they're missing is an event like the World Cup.

PS: If the lj-cut doesn't work I will die.
Source
Source The Stretty Rant in his blog Stretford-End.com shared some exclusive information.