honestly, there isn't one bad thing i can say about this guy <3

This calls for a celebration.

From Ibiza I get the news that Real Madrid's Guti, has got carried away in the crazy nights in Ibiza and that he is starting to put on weight. Moreover, he neither picks up the phone to friends who wish to speak to him or to potential clubs who are interested in signing him for next season.

Guti has had offers from Turkey, Greece, Arabia and Tottenham, but apparently he only thinks about his return to the Santiago Bernabeu. When asked about his future, he states that "I'm returning to Madrid the day I'm called."

Guti has forgotten that hours before the Madrid-Barça Clasico he said no one will put the finger on whether he was staying at Real Madrid and weeks later he made a point of saying goodbye to his fans.

Who knows? Maybe he'll go to Hercules, he has had an offer to join them from his friend Tote, former player of Real Valladolid.

Oh my darling Jose Maria, I love you but for once can you be less of a diva?!

HEY EVERYONE I'M NEW HERE. And I just recently reallly got into the world cup and I'm so pumped for todays game AND REALLY REALLY WANT SPAIN TO WIN. So I put all my pent up energy into making a SPAIN-NT-PICSPAM. Hope this is allowed+hope you enjoy :)
~spam is under the cut

so this guy at the daily beast basically wrote a love letter to the german nt and i thought that a good number of you guys would enjoy reading it.

"What’s more—and what is most refreshing in this Man’s Game played by so many cheating wusses—the Germans don’t dive or whine or cup their hands before their faces in aggressive supplication each time referee calls a foul on them. They are clean, unclouded spirits, with a simple, refreshing narrative of playing and scoring, of winning without adornment, but with an abundance of style."

warning: very NOT tl;dr friendly, but even as a spain supporter, i think it's worth reading anyway :)

is this allowed? i hope it is because it's very sweet.
10h30 to go until SPAIN-GERMANY.

Relief your stress here with the posting of gifs and pictures to support your team.

So I can't help but notice a distinct lack of German picspams on the front page...it's almost as if we have more Spain fans than German ones!

Clearly this needs to be corrected.

So here is a picspam of Germany's latest training session, from yesterday: 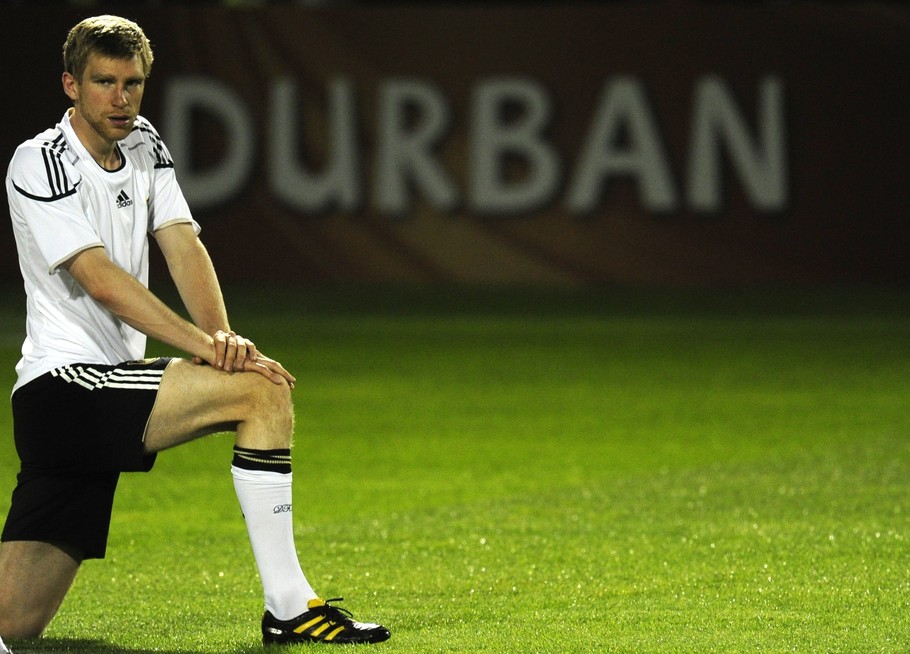 We were talking about female refs the other day, and I mentioned Salomé Di Iorio, argentine football's female referee. Just today I was reading Olé and found and interview with her, so I thought I'd share.

“They've thrown coffee, rolls of paper and sneakers at me...”

Source.
I've been to matches where she was working as an assitant ref, and she's absolutely right. She disallowed a goal in my reserve team's match (yes, I go earlier to see the babies play, whatever) and it caused an uproar in the stands. I'm pretty sure it wouldn't have happened with a guy. Another time, she just walked by and the asshole sitting next to me stood up and clapped while saying "Nicely done, judge, nicely done" even though the only thing she'd done was stand there and be hot. That asshole.

Spain and Germany match was epic, yes but for now let's forget it because we need to pay a lot of respect for Paul the pimpin' octopus for being 100% right thus far. Let's do ANY kind of octopus pic spam/word of praise spam, etc.

Barcelona failed to pay their players at the end of June, club president Sandro Rosell has revealed.

Rosell, who succeeded Joan Laporta at the financially troubled Catalan outfit last week, also said a loan of about £125m had been secured to pay wages.

"We found a club in debt, with liquidity problems. At this point we have to take a loan to pay the wages of the players," he told Sport.

Barca recently sold defender Dmitro Chygrynskiy to Shakhtar Donetsk for about £12.5m to help raise much-needed funds, even though coach Pep Guardiola had been keen to keep him.

However, Rosell has moved to reassure worried fans that Barca's problems are under control and that the process of securing a loan had already started under the previous board.

( Collapse )Ain't Barcelona meant to be the model for other football clubs? ;) What is Platini going to say about this? Oh yes, nothing.

Domestic violence on the day England crashed out of the World Cup shot up by 16%, Greater Manchester Police said.

There were 353 reports of domestic abuse across the region on 27 June - the second highest number in the space of 24 hours this year.

Assistant Chief Constable Terry Sweeney said he was "pleased" by the number of people who had found the courage to come forward after assaults.

He said one of the reasons was the End the Fear campaign, which was fronted by X-Factor and Happy Mondays star, Rowetta Satchell.

After being subjected to domestic violence herself in the past, she stressed the need for victims to report incidents to the authorities and get the necessary help and protection.

A photograph of a football shirt smeared in blood was used to promote the message.

Ms Satchell said: "I've been in a violent relationship and know how hard it can be to get out.

"This campaign aims to make sure that anyone suffering knows how to get the support they need to leave an abusive relationship and start re-building their lives."

Mr Sweeney added: "I also want to send a clear message to offenders that there is no excuse for domestic abuse at any time and we will look to ensure that those responsible are caught and brought to justice."

I heard this on the radio at work and was shocked. I love that football invokes passionate emotions, but this is just a disgusting statistic.

Arsenal Football Club is delighted to announce the signing of defender Laurent Koscielny from French Ligue 1 side Lorient on a long-term contract for an undisclosed fee.

Twenty-four year-old Koscielny, who is predominantly a central defender, made 40 appearances in all competitions during his season with Lorient in the 2009/2010 campaign.

Before joining the north-west French club Lorient in 2009, Koscielny also played for En Avant Guingcamp and Tours in France, where in 2009 he was voted Best Player in Ligue 2 for the 2008/2009 season by his fellow professionals - the UNFP (National Union of Professional Footballers in France).

Although born in France, uncapped Koscielny, who helped Lorient to seventh place in the French league championship last season, would also qualify to represent the Poland national team as a result of his family roots.

Manager Arsène Wenger said: "Koscielny is a central defender with great ability who performed extremely well last season for Lorient. We identified him as a very strong centre half, who has made big progress very quickly. He has shown he is mentally strong, he's a fighter and a very strong competitor. Koscielny is a great addition to our squad."

New Arsenal player Koscielny said: "I'm very excited to be joining Arsenal. They are one of the biggest teams in Europe with many great players. I'm really looking forward to playing in the English Premier League and the Champions League with my new club. Also, in Arsène Wenger, Arsenal has one of the best managers in the world and I can't wait to work with him and do my best for the Arsenal supporters."

Koscielny, who will wear the number 6 shirt, is scheduled to make his first appearance at Emirates Stadium over the weekend of Friday 31st July and Saturday 1st August, when Arsenal compete with AC Milan, Celtic and Olympique Lyonnais for the Emirates Cup 2010. For further information

ABOUT FOOTBALLERS KISSING OF COURSE!!!

It doesn't matter what will happen in the end.
Just give it your best!
We will always support you!

I have to say a few words. One of the things that I like most about the Worldcup and Eurocup - in the last couple of years - is that we germans can proudly wave our national flag without feeling ashamed about it. So my thanks at Die Mannschaft! Thank you for making it possible!

Since this incident happened~~~

I decided to say FUCK YOU PAUL!!! & wanted to do something fun with my spare change :3
For all you bitches out there who is waiting to see tonight's game & most likely it will happen again if my faves (Germany) get into the finals ;D

Here is how it goes~~~
You place bets & after the game whoever got the right bet or the closest bet gets paid account or LJ goodies based on your rank ;D

dear mod person i hope you won't hate this idea <3

A paparazzi followed CR in New York and asked him questions about his new son:

If you watched the Spain-Germany World Cup semi-final today, you would have seen a fan run onto the pitch within the first few minutes and get immediately apprehended by the stadium guards. When I watched and saw this happen I said to myself “this guy looks like the Cassano pitch invader. Same t-shirt style. But it can’t be him, it’s Spain-Germany”. ( Collapse )

So, the world cup has been awesome this year, and I couldn't help but think of lookalikes for some of the players....