"I'm not blind, I saw everything, I just didn't do anything about it".
"Where is the ball? Where is the slow motion button? The heck, the ball was not in the gate".
"Tevez was not out of the game. Tha game was just to far from Tevez".

The Schalke No 1 claimed the ball was around two metres over the line while German legend and former coach Jurgen Klinsmann branded the referee’s blunder a ‘disgrace’.

Neuer said: ‘I tried not to react to the referee and just concentrate on what was happening. I realised it was over the line and I think the way I carried on so quickly fooled the referee into thinking it was not over. 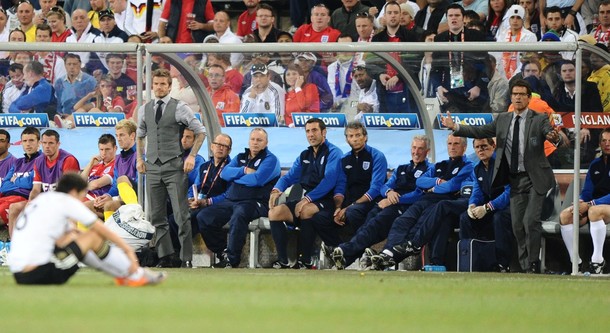 Two men wore suits on the England bench yesterday as the team crashed out of the World Cup following a 4-1 defeat by a ruthlessly efficient German team in Bloemfontein.

One was the head coach, Fabio Capello, the other the head cheerleader, David Beckham.

The injured former captain looked every inch a manager yesterday as he harangued Uruguayan referee Jorge Larrionda at half-time for not allowing Frank Lampard's equaliser.

With his sleeves rolled up, Beckham was playing every ball and sweating every sinew as England, frankly, flopped on the biggest stage.

Capello insisted it was his idea to take Goldenballs' Beckham to the World Cup. His role has never clearly been defined. Rio Ferdinand spoke glowingly about the influence he was having on the squad in the build-up to the tournament but still the suspicion remained that he was only there to help our 2018 World Cup bid.

Just a note, Capello and Becks.. BAMFs you don't want to mess with..

JOHANNESBURG -- FIFA will censor World Cup match action being shown on giant screens inside the stadium after replays of Argentina's disputed first goal against Mexico fueled arguments on the pitch.

Angry Mexico players protested to referee Roberto Rosetti after the screens in Johannesburg's Soccer City showed Argentina forward Carlos Tevez was offside before he scored the opening goal in a 3-1 victory on Sunday.

"This will be corrected and we will have a closer look into that," Maingot told a news conference Monday. "We will work on this and be a bit more, I would say, tight on this for the games to be played."

THIS IS AN OUTRAGE! Why does FIFA think fans don't have the right to know?? Is this the World Cup or an rigged game of roulette in an illegal gambling hall? Is this 2010 or 1984? By keeping the supporters (who spent good hard earned money to be there) in the dark FIFA is effectively taking greater steps to move further away from replay and change history. If no one in the stands sees that the ball never crossed the line, then FIFA don't have to be held as accountable. If FIFA think we're dumb enough to not get this, they're underestimating our collective global intelligence. By taking away replay in the stands, ppl who get their hearts broken might have to wait until they get all the way back to the hotel (or perhaps until they get home!) to see what really happened. WHO IS FIFA PROTECTING HERE?!?! I feel like FIFA is being run more like the Medieval Vatican (that's not a religious insult, it's a fiscal one) than a governing body of sport supported by and supposedly for the people. World Cup? More like World Scam. It's insulting that FIFA think the masses are so stupid, as if we don't understand what thing ruling means. This could end up meaning that in all future FIFA events there will never be replays goals that are 'deemed controversial' in the stands. Considering how much money FIFA is making off all this shit, I think everyone should be pissed about it. Does anyone check the financial reports of this organization? Who holds FIFA accountable? And are they? I love this game, so many of us love this game, we alter our lives so we can watch matches, we get behind the players, we represents our regions and our countries. it's insulting to know that FIFA is knowingly taking advantage of the passion that we have for the sport to fuel their personal profit.

On Thursday to cheer on die mannschaft

sorry if somebody posted this already!

Add in your curiosities and answer others. (write QUESTION if you are asking one in the subject area so it would be easier to see among the other discussions).

-How many kits does team they have? is it a new one for each match? (since after all some of them are tossed to the audience and swapped)

-How do teams book for their flights (and hotels), I mean is it just a one way ticket and then when they lose they just get the next plane that has enough seats or do they assume that they will stay till the end and get a round trip flight for that?

-Has any team's locker room ever been sabotaged? was the perpetrator caught?

-What has been the worst injury ever on the field? (that you know of)

-Has the referee ever interfered with the play? (as in accidentally got in the way of the ball)

He's so happy. Can you tell?
Real Madrid C. F. and S. L. Benfica have come to terms for the transfer of Angel di Maria. The player will sign a six year contract with Real Madrid C.F. [ Rumor is it cost about €25-30 million. ]

Iker to Manchester United rumors thanks you for your time.

SORRY FOR THE LACK OF COMMENTRY, I DIDN'T GET TO WATCH THE GAME BECAUSE OF CLASS BUT I WAS WATCHING ESPN MOBILE.

Johannesburg - The cleaning staff of the luxurious hotel where the English National Team stayed at during the World Cup stole shirts, a medal and even underwear from the players, stated the police on Monday.

The chief of the force, Junior Metsi, indicated that also about 500 pounds were taken. The thiefs seemed more interested in taking collection articles, like a USA shirt that an English player had received after the game.

A medal given by the FIFA and the underwear disappeared in a streak of robberies that, according to the police, started on June 21st.

The robberies weren't reported to the police until last Saturday. Metsi affirmed that the case was resolved the same day, after checking the houses of the cleaning staff of the hotel near Rustenburg, close to Johannesburg.

"Everything that was stoled was returned and they [the thiefs] are behind bars", she said.

A special World Cup court found 5 workers of the hotel guilty on Sunday. They were sentenced to 3 years of prison and a fine of 6000 rands (around 800 dolars).

Metsi didn't specify the players that were victims of the crime.

ROME - The Inter striker Mario Balotelli gained the media's attention again after it came to the light that the police stopped him yesterday in the center of Milan while he was "shooting" to the air with a toy gun.

The player was travelling in his black Audi through the streets of Milan along with 3 friends, when they decided to start shooting to the air.

The joke made a few passerby's suspicious, and they called the police thinking it was a real weapon.

The police agents stopped the car and identified the passengers, Balotelli between them, to then leave them and drive away when they realized it was a toy gun.

Neither of the 4 men was arrested nor formally accused, and the Inter striker hurried to apologize for the facts.

Used to being in the spotlight for his scandals both in and outside the field, Balotelli said shortly after that it had been a "child's game".

"I didn't do anything, I was just playing with my friends", he excused himself to La Gazzetta dello Sport, where he also assures he's focusing to start the next season with Inter.

Real Madrid have a line of men and women underwear out. Sergio, Cristiano, Kaka and Iker have yet to model. These will have to do until then.

They even glow in the dark!!!

They were the most entertaining team at the World Cup, and while we are sad to see them go home, they provided enough attacking flair and style to make a relatively dull group stage a hell of a lot of fun.

yeah, this is not an awkward picture at all
( Collapse )

"Watching the World Cup is like watching a global spanking spectacle – why do soccer players and coaches like to slap each other on the buttocks?
When a player leaves the field or comes on as a substitute, the coach usually sends him off with a slap on the buttocks. When a player accidentaly rough-tackled another, the perpetrator apologises, offers the victim a hand up and slaps him on the buttocks.
Is there something they are trying to tell us?
Do soccer players have a male buttocks fetish?
I don’t want to talk about rugby because they grope each other there all the time."

i don't know what he's complaining about.
anyone want to provide more pictorial/gif evidence of this phenomenon?

Although this community is the best proof of the fact that women can and MUST LOVE FOOTBALL, there are still some lads that refuse to see the beauty within this amazing sport.

This are three POWERFUL reasons why WOMEN HATE FOOTBALL:

Quick unrelated question: Does anyone know which team is sponsored by Northern Rock and has a yellow jersey? Mistery solved.
Collapse