John Terry stands accused of nearly ending the career of England team-mate James Milner with a second-half challenge during Chelsea's FA Cup semi-final win over Aston Villa at Wembley.
Villa manager Martin O'Neill launched a furious attack on the defender, who was only booked for the lunging tackle that caught World Cup hopeful Milner around the knee in the 74th minute.
Milner finished the match but O'Neill insisted his midfielder was 'very lucky' to be looking forward to playing again. 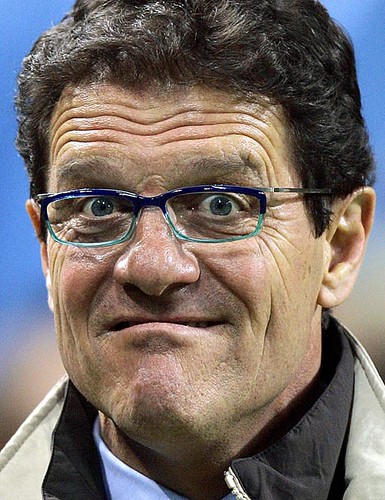 You gotta love this man.

Fabio Capello has banned his England players from using social networking sites such as Twitter and Facebook during the World Cup in South Africa this summer.
And England's manager is likely to limit visits from the players' wives and girlfriends in a bid to prevent his squad being distracted from the task of winning the biggest trophy in the game.
Capello's obsession with controlling every aspect of his players' lives as he attempts to lead them to World Cup glory means Twitter and Facebook will be designated no-go areas once the players reach their hotel outside Rustenburg.

The Italian is concerned that unchecked internet comments from players about life at the England camp could be divisive.

Tonight is the first televised game. FSC shows 1 game a week, on Sunday nights. WPS.com will also be streaming it on their website. You can click the banner for a direct link.

Tell me who else is playing and I will update this.

I decided to make a post of the funny pictures I'd collected from last night's match, for Cules Madrididstas, and in general LOL-loving people to share :)

This spam btw has no chronological structure...because I couldn't be arsed to make one. so..suck it?

Let's invite you in with a picture of a random Barca player's crotch. Anyone up for Spot the Junk?