The new MLS Team Philadelphia Union has come to the Agreement to host a game with #3 in La Liga Valencia C.F.!!!

CHESTER, Pa. (March 17, 2010) – As part of Philadelphia Union’s promise to bring top notch competition to Chester, club officials have announced an agreement to host Valencia C.F. at PPL Park this summer as part of the club’s season ticket package. A date and time for the game have not yet been finalized.

“Valencia will be a great test for our club and we’re excited for the challenge,” added Team Manager Peter Nowak. “Playing top international teams will always be a valuable way to continue our development.”

One of the top clubs in Spain, Valencia currently sits in third place in the La Liga standings and boasts a lineup made up of Spanish superstars David Villa, David Silva and Juan Manuel Mata.


OMG!!!!!! This is freaking amazing! Like seriously all you Valencia bb's need to get on it.
<a href="http://www.philadelphiaunion.com/Content1.aspx?cid=2.1/">salsa</a>

Goal.com UK has analysed the squads and selected a combined team, the match for any in the world...
GOALKEEPER

Reina supreme | Pepe is No.1
Jose Reina: It has been a season of inconsistency at Anfield, but one man has stood head and shoulders above the mediocrity. Pepe Reina has been in immense form; commanding, with impeccable positional play and excellent distribution. Edwin Van der Sar has his merits, but Reina is arguably the Premier League's finest 'keeper at the moment.( Collapse )

John Terry was breathalysed and questioned by police last night fter he knocked down a club security steward with his car, breaking his leg.

Attempting to drive away from Stamford Bridge hours after his team were knocked out the Champions League by Inter Milan, Terry's car was surrounded by photographers, leaving him at a standstill.

Chelsea's security team eventually managed to clear room for Terry to move forward but as he drove on at a snail's pace, his Range Rover collided with the man's leg.

Terry was unaware of the incident at the time and drove home without stopping, but he was later contacted by police.

A Metropolitan Police spokesman said they were called to the scene.

'A 35-year-old male was found with a broken leg,' he said. 'He has been taken to a west London hospital where he is in a stable condition.

The driver of a dark coloured 4 x 4 car failed to stop at the scene. No arrests were made though enquiries into the incident continue.'

Two things we have learnt from this chapter

Albert Riera has indicated that he wants to leave Liverpool after revealing that his relationship with Rafael Benítez has deteriorated to the point where he thinks the manager has something against him.

In an outspoken attack on Benítez, Riera said the manager "turns a deaf ear" to his players and described Liverpool as a "sinking ship". He also questioned whether his fellow Spaniard was suited to the Real Madrid job because his style of football is not attractive enough.

Riera has played only twice for Liverpool since the end of January, making one start and one substitute's appearance in the Europa League, and the midfielder is giving serious consideration to asking for a transfer in an effort to earn a place in Spain's World Cup squad.

"When the coach doesn't say anything to you and you are in good shape with no physical problems and training well, you have no choice but to think [the fact you are not playing] is personal," Riera said. "The team's playing badly and needs changes. If I'm doing something badly and you're my boss and you trust in me, then you would tell me what I am doing wrong and what I have to do to play. [The fact that Benítez has not said anything] is what most hurts.

"Right now the only market open is the Russian one. I have offers from two clubs and, given my situation, that has made me reflect a lot ... My objective is to go to the World Cup and for that to happen I have to play."

Riera said he was not alone in having communication problems with Benítez. "He thinks he is in charge and he just turns a deaf ear to everyone else," he told Radio Marca in Spain. "The dialogue with the players is practically non-existent. There is a lack of tact."

Asked about Benítez's credentials for Madrid, where Manuel Pellegrini is not expected to be in charge next season, Riera said: "At Madrid they ask you to win and play lovely football. We are effective, sure, but we don't play brilliant football."


The Guardian or MARCA.com (in Spanish obviously)

Not too subtle is it? Riera is trying to make staying at Liverpool untenable, and so there's nothing like giving your employers a healthy dose of bad publicity on the eve of two season defining matches. As a player he could be inconsistent, but I liked having him in the squad as he was a genuine left-sided attacker (Yossi and Babel are/ have the potential to be better players, but they aren't natural on the left). But as to Riera saying that Benitez "thinks he is in charge...", umm well, he kinda is. Another "footballer is not too bright shocker" I guess.

The Italian reportedly has a stomach upset and could yet miss the Reds' clash with Lille at Anfield on Thursday evening, though the club are optmistic that he will recover in time.

Obviously, this is only an excuse to post Gernando 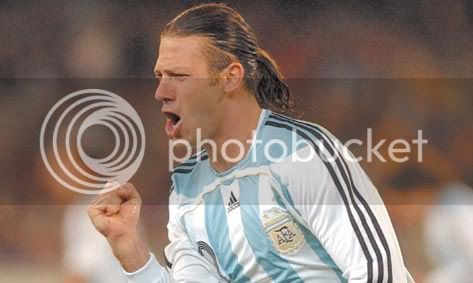 MUNICH (AP) — Bayern Munich's Argentina defender Martin Demichelis is disappointed with Michael Ballack after suffering multiple facial injuries in a collision with the Germany captain.
Ballack accidentally shattered several bones in Demichelis' face with his knee during Argentina's 1-0 victory over Germany earlier this month.
Ballack never bothered to ask about his health or to wish him a speedy recovery although the two spent three seasons together at Bayern, Demichelis said at a news conference Wednesday.
"He is a great footballer but as a human being there is nothing to say about him," Demichelis said. "I am disappointed. We played together for three years at Bayern Munich. He could have at least sent some greetings."
Demichelis said he had been afraid immediately after the injury that he might miss the World Cup, but that he is now confident he will recover by then.

Micho recently said that he almost lost an eye due to this injury. Get well soon =) /keep it classy, Ballack.

Diddy to save Crystal Palace(?)

RAP star P DIDDY plans to put the Cristal into Crystal Palace with a shock bid for the struggling London footie team. The hip-hop mogul has decided he wants to be the next filthy rich foreign owner of an English club.

And Diddy, real name Sean Combs, is planning to splash some of his reported £360million on the Selhurst Park side who gave Sun columnist IAN WRIGHT his big break in football.

The bankrupt club is in chaos, facing relegation from the Coca-Cola Championship after having ten points docked for going into administration. Former owner SIMON JORDAN was no stranger to the jet-set - so at least the poor fans are used to flamboyant playboy owners with a taste for the high life.

Diddy's swoop for The Eagles would bring some much needed bling back to south east London. Last night his UK spokesman confirmed the multi-millionaire is in the market for Palace. He also added that the New Yorker has his eye on another big club.

A source said: "Diddy was in London meeting football fixers a couple of weeks ago. The finance is in place, he's just deciding who he thinks he'll make a bid for. Portsmouth were mentioned but he thought Palace were a better idea. He could cover their debt and bankroll a return to the Premier League. He liked the name as well."

English football is big business and I'm surprised it's taken the loaded rappers so long to get involved. I only live round the corner from Palace and I'd be happy to show Diddy the best pubs in Forest Hill and East Dulwich. He'd be welcome to a can of Irn-Bru at Smart Towers too. There's some Selhurst Park history that I can fill him in on.

It was the scene of ERIC CANTONA's kung-fu kick on a fan. DAVID BECKHAM scored his stunning goal from the halfway line for Man Utd when Wimbledon were sharing the ground with Palace. Speaking of Becks, the crocked star's commercial success in America with LA Galaxy must have had an impact on Diddy. But I think he should be looking north of the border to spend his pennies.

source of this fuckery

Well, if Jay Z can move the Nets to Brooklyn, I'm sure Diddy has some magic up his sleeve as well.....
Collapse