He was at Mariana Kovacevic's house/'sterile' treatment centre for all of Wednesday being massaged with said fluid. Other notable clients include PSV Eindhoven's Danko Lazovic and Liverpool's Glen Johnson & Fabio Aurelio. http://www.football.co.uk/arsenal/smiles_better_for_injured_van_persie_after_serbian_housewife_treatment_rss267948.shtml

So, there we have it. RvP setting trends and sparking controversy. He gon' run dis town tonite..

Btw, we should have a placenta tag.. (is that asking for too much? sorry.)

it's friday
feel free to use this poast to

ask for advice (i give it for free)

19/11/2009 training session. Interesting evolutions. Cris Kaka and Gonzalo in their best form. Enjoy [despite of watermarks :(]

( Collapse )
the new fifa rankings have been released, showing that spain have overtaken brazil as number 1 and england and argentina have both dropped 2 places. 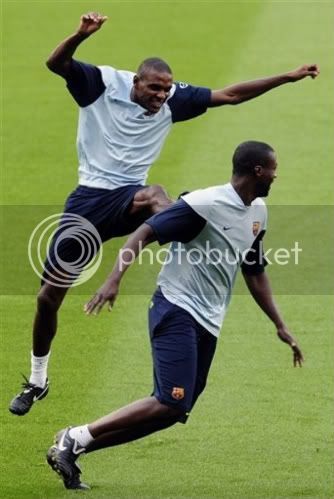 Eric Abidal and Yaya Toure have been confirmed as the first Barcelona players to come down with H1NI swine flu.

Defender Abidal was already out injured with a thigh problem, but the Catalan giants will miss midfielder Toure as they start a critical week of action with a trip to Athletic Bilbao on Saturday, followed by the 'classico' against Real Madrid at the Camp Nou eight days later.
Doubts also remain over Barclenoa skipper Carles Puyol, who picked up a knock while on duty with Spain, while Zlatan Ibrahimovic could also be sidelined with a hamstring injury.
League leaders Barca are just a point ahead of arch-rivals Real, who host struggling Racing Santander in their next La Liga match.

ETA: According to other sources, Yaya's case has yet to be confirmed.

ETA² : Yaya has been diagnosed with the virus too.

"The club’s medical services have implemented all the recommended protocols for the prevention and treatment of the virus."

About 200 European football matches are under investigation in a match-fixing inquiry, German prosecutors have said.

At least three of the games were in the Champions League and another 12 were in the Uefa Europa League, officials said.

On Thursday police carried out about 50 raids in Germany, the UK, Switzerland and Austria, making 17 arrests and seizing cash and property.

Prosecutors believe a criminal gang has bribed players, coaches, referees and officials to fix games and then made money by betting on the results.

The investigation is being carried out by German authorities and supported by Uefa, the European football body.

Prosecutors said cash and property seized in Thursday's raids was valued at more than 1m euros (£900,000).

All the matches under suspicion are believed to have taken place this year, although prosecutors did not specify if they were qualifying games or group-round matches.

Speaking at a press conference in Germany, Mr Limacher said the revelations represented "clearly" the worst ever match-fixing scandal in European football.

He said the arrests were proof that the detection system was working.

"We feel a certain satisfaction but on the other side we are deeply affected by the scope of game manipulations by international gangs," he added.

A German police spokesman told the BBC that officers in the UK had been helping in the inquiry but that no British football matches were under suspicion.

UK police said they had carried out a search in the Greater London area following a request from German law enforcement officials.

I bolded the important parts because I can't find a suitable picture and the text alone looks boring.

As you know, FIFA rejected FAI's request and already, everyone's getting worked up. Emmanuel petit, Henry's former teammate, says, "The feeling among the French public is one of embarrassment. More and more often we see people cheating to reach their targets so Thierry's handball will not send out a good message."

French legend David Ginola adds: "I do not feel very proud to be French at the moment. Something should be done. The whole world saw it was handball. I am very embarrassed."

Its not just them. Raymond Domenech, coach of the French National Team, invited Bixente Lizarazu, another former teammate, over for a paarty to celebrate France's qualification. Lizarazu- "France have done nothing. I'm in no mood for a pa(a)rty." Arsenal boss Wenger, who went to the dressing room to urge his protégé to apologise, said: “One should (own up), but one doesn’t, we know, with the pressure and what’s at stake. We qualified by the back door like Portugal. Our qualification resembled that of Portugal. A bad start, a lack of confidence and we got through with a very uncomfortable feeling."

However, Arsene backs Henry stating that pressure was behind his tight-lippedness during the game.


Mick McCarthy is the only one that knows what FIFA really stands for. "I said FIFA stands for Forget Irish Football Altogether when I was manager."

Wolves boss McCarthy added: "If I was Richard Dunne and aged 29, I can tell you Thierry Henry wouldn't have sat by me. I'm 50 now, I'd shake Raymond Domenech's hand. But 20 years ago I don't know what I would have done. Hugs and kisses? No chance. There is not a snowball's chance in hell I would have sat there with him, knowing what he had just done. [And] It would have taken three seconds to have seen it on a replay. [But] I don't blame the referee - he didn't see it. But there was a linesman who could not have missed it. Imagine if France had gone out like that."

Despite all that pishposh, McCarthy doesn't put Henry into a box. "There will be a few up on their soap box giving a moral lecture but if Robbie Keane had done it and we were going to the World Cup, we'd take it. It's something everyone accepts. It doesn't make it right but that's the way it is."

Roy Keane: They got what they deserved. He has been critical of the FAI since his walk-out from the Republic of Ireland's training camp just before the 2002 World cup. "Ireland had their chances in the two games [against France], and they never took them," he said. "But it's the usual FAI reaction - 'We've been robbed, the honesty of the game.' There was one match against Georgia where Ireland got a penalty and it was one of the worst decisions I've ever seen which changed the whole course of the game. I don't remember the FAI after the game saying we should give them a replay."

Thierry Henry admits that a replay would "be the fairest solution". "Of course the fairest solution would be to replay the game but it is not in my control. Naturally I feel embarrassed at the way that we won and feel extremely sorry for the Irish who definitely deserve to be in South Africa. There is little more I can do apart from admit that the ball had contact with my hand leading up to our equalising goal and I feel very sorry for the Irish."

he adds- "I have said at the time and I will say again that yes I handled the ball. I am not a cheat and never have been. It was an instinctive reaction to a ball that was coming extremely fast in a crowded penalty area. As a footballer you do not have the luxury of the television to slow the pace of the ball down 100 times to be able to make a conscious decision. People are viewing a slow motion version of what happened and not what I or any other footballer faces in the game. If people look at it in full speed you will see that it was an instinctive reaction. It is impossible to be anything other than that. I have never denied that the ball was controlled with my hand. I told the Irish players, the referee and the media this after the game."

Wenger also weighs in. "At the game, I saw the referee giving a goal knowing that something was wrong and that is really sad. In the end, he gave a goal already knowing that it wasn't a goal. We cannot accept that in our sport and you have to do something about it. The referee didn't see it, I can understand that, the linesman didn't see it, but they couldn't get any help. For the sense of justice it is quite embarrassing to see. I think even France is embarrassed. We didn't play well at all and we won the game and won the qualification with a goal that was not a goal."

And so did Mr fergsie- "The stance is that Fifa prefer human decision-making rather than technology decision-making and until they change their mind there is nothing you can do about it - you have to convince them, nobody else."

What do you think?