its basically saying that real madrid have had him examined and that he is not fit to play with portugal (something we all knew) and that they have the right to refuse the call up over medical issues, due to fifa regulations. Real Madrid have stated "Cristiano will not move from here" which is probably something we all figured out already. besides....we wouldnt want perez and his army to invade portugal to have queiroz's head now would we???

ps. i cant get the cut to work and im in a rush to get to school :S sorry

Ray Hudson after Pedro's goal against Mallorca Saturday. Watch this while sitting down.


"IT'S LIKE
TWO BEAUTIFUL BIRDS
SINGING IN MY
RIBCAGE!!!!!!"

Slovakia vs. US, in Bratislava, Slovakia; Saturday, 14 November, 10AM EST (ughhhhhhhhh), live on Fox Soccer Channel and Galavision
Denmark vs. US in Aarhus, Denmark; Wednesday, 18 November, 2:30 PM EST, rumored to be on ESPN2/HD (US Soccer hasn't released the official TV channel but my guess is with FSC getting one game, this one's gonna be on ESPN, they just have to figure out which channel)

Bob says:
“These matches present a terrific opportunity to continue building on the nucleus of our team, and at the same time evaluate more of the player pool against very good opponents,” said Bradley. “We are very pleased with what we have accomplished in a long and challenging year, and we move forward with the goal of getting ourselves ready to be a competitive team in the World Cup.”

Squad for friendlies with Argentina and Austria:

i'm glad Jesus Navas finally got a call up, i hope he does well! and although, i'm glad that Nando didn't get called up because he needs to rest his injury, this is the second time he's been injured when he's had the chance to return to the vicente calderon :(
( Collapse )
</div>

Pep and his family celebrate Mallorca win with a basketball game 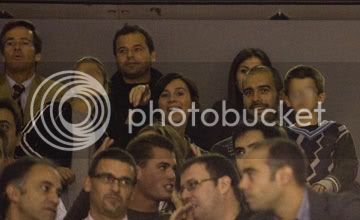 It's still 11/09/09 here, so to celebrate Alex Del Piero's 35th Birthday here's a tiny spam. He was my crush in the late 90s early 2000s. He used to be considered Roberto Baggio's heir, till he made a name for himself. I still consider him one of the best Italian football players ever. Too bad he never won the Ball d'or.

Chelsea have confirmed that Ashley Cole has been diagnosed with a fractured tibia and the left-back is now expected to be sidelined for a number of weeks.

The injury means that Cole is missing from the England squad that will face Brazil in Qatar on Saturday and Chelsea have also been hit hard by the news.

Cole first sustained the injury in a Champions League game against Atletico Madrid on October 21, subsequently missing three games, and required pain-killing injections to play in the 1-0 win over Manchester United on Sunday.

However, Cole will now require a spell on the sidelines after aggravating the problem at Stamford Bridge.

"Ashley Cole has not been selected in the England squad for their friendly against Brazil," a Chelsea spokesman said. "He has a depressed fracture of the tibia, an injury first picked up in the Atletico Madrid home match last month.

"He aggravated the injury before the match against Manchester United and required an injection to play. However, he further injured it during the game and has therefore been ruled out of this week's England squad.''

GRENOBLE HAVE A POINT, YAY!

Heres the rest <3
Hope you enjoy !