Looking over the fixtures, it's possible that the Euro U21 final could be a repeat of last year's Euro 2008 final. But I'm going for heart-over-head and predicting England to win it! :)

Who was this Portugese kid? Why did United buy him? He was way too skinny to make it.

I didn't see it posted so I thought I would...

Schalke midfielder Jermaine Jones will not play for the German national team and will in future represent the United States.

The 27-year-old has made three appearances for Germany but since all three of his caps came in friendly matches, he is still permitted to represent another nation.

As well as holding German citizenship, Jones also has a US passport and has therefore decided to switch allegiances.

He informed the German Football Association (DFB) of his decision today.

"We have accepted Jermaine Jones' decision," said Germany coach Joachim Loew in a statement. "I wish him all the best for his sporting future."

Jones played against Austria on February 6, 2008, Belarus on May 27, 2008 and England on November 19, 2008, but according to the new constitution agreed by football's world governing body FIFA recently, this does not preclude him from a change.

And Germany will not try to block him from appearing for the USA in future.

"We have often emphasised how much we like to welcome many players with backgrounds of immigration into the Germany national team," explained team manager Oliver Bierhoff. "This reflects the development of society in our country, but we have always emphasised that anybody who wears the DFB colours must identify with the national team and Germany.

"If a player does not see things this way, then that is his decision and we respect it."

Loew recently awarded international debuts to Brazil-born striker Cacau and Mesut Ozil, who had the option of representing Turkey.

Jones' father hails from the USA, which accounts for his dual citizenship.

find the two errors in this ad

and win a trip to seoul!

There was an awards ceremony held last week by the organization Futbol Draft at the Bernabeu to recognize young Spanish talent. The buffet of jailbait that ranged from players aged 16-20 from all divisions in Spain and Europe. The awards were seperated into gold, silver and bronze categories and a few of our favourite embryos bagged awards from the 'gold' section!!!!!

Hey guys! Chris Toy from Studs Up asked people to retweet a link. It's for a charity event which is going to be held in NYC on 24th of June. Anyway, if you donate $5 to the charity you can win a trip to NYC. You can learn more about it here.

But the point of this post is that there is a viral video going around to promote the cause. It features several famous footballers who are rumoured to be taking part in the event such as Joe Cole, Alessandro Del Piero, Kaka, Gennaro Gattuso, Massimo Ambrosini and Titi. You can actually see Titi's house in the video. Well if it is his house. So yeah. :D

Btw, if you still don't know, that's Steve Nash down there in the video.

Cissé and Nasri vacay together with their respective partners in Miami.

FML because I didn't realize Nasri and Tati were still together.
Also FML because I live in NYC not in Miami - I can't stalk them.

And because I don't know how to create a LJ cut, here's the link/source:
http://www.kickette.com/index.php?/site/comments/vacay_djibril_cisse_and_samir_nasri_in_miami/

"it is scarier to see a lion than seeing the Real Madrid of Florentino [Perez]".

“With the money he will sign various players. I do not think there is another player worth €93 million, so he will not spend it on one. I am sure he will invest strongly to make a great team like the ones he has had in his 25 year career. He will create a team that will give him many titles again,”

“We are shaping our players to become the FIFA World Player of the Year, while they are merely buying them."
“Right now, Madrid are just signing famous players and it will be difficult for them to combine all these figures together,” he cautioned.

“Each person does what he wants with his own money, but it is important not to go astray, especially when there’s a global economic crisis,”

“There will always be pressure and anxiety, but we will act calmly. We have the experience to confront such situations and we have already planned for the season ahead.”

When asked if Ribery will be the latest addition at the Bernabeu, the defender replied:

“I think they already have enough with Ronaldo and Kaka."
"I also think my compañero Eric Abidal is sexy as haaale. You should all click the cut to check out his muy wapo modeling fotos, because DAAAAAAAYUM son, he is red-card hot!"

Good evening/afternoon/whatever time it is where you are. This is Friday Night Smackdown (although the first sentence, kind of contradicts that, whatever). You know the rules, you know the game.

And a quick note, in the new few rounds be prepared for repeats from the very first unvoted version so that the players can be included in the knockout rounds. And on another note, we're expecting to do in total 8 rounds of this, and then following will be the semi-finals, eventually getting to the finals. 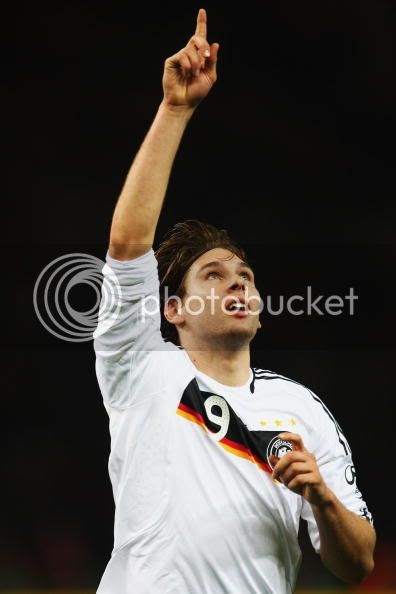 Bayer Leverkusen's Germany striker Patrick Helmes will be out for up to six months having damaged his cruciate knee ligament while on holiday, it was revealed on Friday.

The 25-year-old had an operation on Friday after picking up the injury in a kick-around with friends during his summer break, according to German tabloid Bild.

"It is a bitter pill for Patrick to swallow, he will be missed," said Leverkusen's coach Jupp Heynckes.

With a year to go before the World Cup, Germany coach Joachim Loew said he had sympathy for the striker who has 12 caps and scored in the 2-1 friendly defeat to England last November.

"That is unfortunate for Patrick that he picked up an injury in the summer holiday," said Loew.

"Whether it sets him back for the World Cup, it is really too early to say.

"Philipp Lahm had a similar situation in 2006 and he was back in time and scored the opening goal."

First of all: I can't believe I didn't knew of the existence of this community until yesterday! *flails*


Lehmann was in South Africa, Cape Town for the last couple of days to film his scenes in the African/German co-production Themba.

According to director Stefanie Sycholt Lehmann "is very accessible, very respectful, no airs and graces." So no diva behaviour on the set by Mad Jens. >:)

There was also a radio report on Deutsche Welle. They mention that Zinédin Zidan and Oliver Kahn had been considered for the part as well but that Sycholt sounds clearly delighted that Lehmann got it:

"Jens Lehmann is probably one of the most beautiful German football players. He is incredibly handsome, he is charming, charismatic, he could absolutely be an actor with his looks, a complete ladies-man. And surley, if he wants to, he could develope further in that direction (she means acting *g*)."

Ooooh, someone dazzled the director!

And a bit more info on the movie. There are more detailed summaries of the story but they all contain major spoilers so lets leave it at that.

check the vid!It s so funny to see how they are all sitting on a safari bus( sorry I suck at lj-cuts-> just click on link)

CHERYL Cole sent Will.I.Am a box of Krispy Kreme donuts to congratulate him on Black Eyed Peas’ return to No 1 with Boom Boom Pow.

But the kind gesture by the Girls Aloud cutie, 25, who featured on Will’s solo hit Heartbreaker, was eaten by the band’s crew as Will is watching his weight.

In his first UK interview since topping the charts, the Peas mastermind said: “Cheryl is cool. When I was in London she sent me some Krispy Kremes and a note saying congratulations on the No 1.

“I want to eat healthy and feel right before we tour and staying regimented is hard.”

Now where would Cheryl Cole hide anything? Super-thin singer gets frisked at airport

( Collapse )
She looks stunning. And Cheryl >>> any WAG anyone kthx.

I want a Cherul tag

Roma full-back John Arne Riise was stunned to find that, while on international duty with Norway, his apartment in Oslo had been broken into and all his medals stolen.

Taken from his residence was his coveted Champions League winner's medal, which he earned with Liverpool in 2005 after helping the Reds defeat AC Milan in Istanbul.

"I am truly sorry," he explained to Aftenposten.

"That medal is the most important of my career, I struggled and worked all my life for it, and now it is no more. I'd rather it had been my TV."

Commenting on the matter of the stolen awards, which also include an FA Cup winner's medal, the 28-year-old hopes that whoever stole his prizes will eventually return them.

"I don't think a medal like that is easy to sell on the market. I hope they decide to return the stolen property," he concluded.

This is not the first time Riise has been a victim of theft, during his spell in England the former Monaco man had his car stolen. La Seleccion coach Vincente del Bosque had to significantly reshuffle his squad for last Tuesday’s friendly against as numerous key figures were out injured, but the Euro 2008 winners are expected to be back to full strength for their competition opener against New Zealand.
According to AS, defenders Carles Puyol and Sergio Ramos, who only featured as substitutes in midweek, both trained normally with the rest of the squad without any problems. Winger David Silva has also been given a clean bill of health by the medical team and will be available to start against the Kiwis.

Gerard Pique has also recovered from his adductor strain but he has not yet returned to 100 per cent fitness and the doctors will monitor his progress to make sure he doesn’t slip into a relapse.

The only bad news in yesterday’s session was that midfielder Sergi Busquets suffered a minor muscle overload after stepping on a soft patch of turf. His injury is not serious, however, and he is expected to resume training on Friday.

Kinda sad that Pique isn't up to full fitness.. but I want to see him in the more "important" games so I guess this is good.
Also, this post is an excuse to debut my new Pique icon.

So, with the help of daylife and rfef let's see what la seleccion is up to
[expect only pictures since i noticed videos have already been posted ;)]

The boy makes a poem.
The players will read a poem.
Collapse