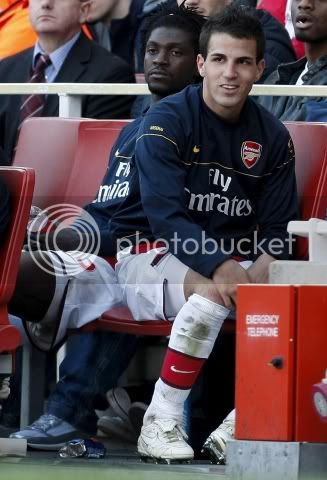 Cesc Fabregas, who has been absent for more than 3 months with a knee injury, and Adebayor, who had been sidelined for 8 weeks with a problem hammy, were back with a bang for Arsenal yesterday combining for both of the gunner's goals. Theo Walcott also returned from 10 days out with a knee niggle, as Arsenal extended the unbeaten run to 17 games!

“I am very happy at Arsenal and have said it many times – but I cannot control what the media say.

“When they speak for me, I cannot understand it because only my friends, family and the boss know what I think.

“It is just a story which will go on and on – even if I was to say that I would retire here.

“I am proud to be captain of this club and see my future at Arsenal.”
Here's a Cescy video with yesterday's two goals at the end
What's Shava been saying about Cescy and Photos of Arshavin, Rambo, Ade, Kolo, Fab, Theo and the boys under the cut...

Now I make fucking Money
I went from the Euro to the English Pound
I put money in my pocket, now I spend money on nothing
I Like it this way, I'm sure you like it
If somebody want beef, well come on
I like it with some pepper, homie
lyrics from his rap song

so how many athletes AND rappers do we know who are modest about their spending?


A look inside Babel's studio

Also on his site is a contest for meeting him at the Blackburn game, if you're interested in that
http://www.babelofficial.com/en/liverpool_competition.asp

The uncompromising defender is on his way to notoriety at the Santiago Bernabeu after picking up his 50th booking with Los Blancos.

Sergio Ramos picked up a caution in the 37th minute of Real Madrid’s 1-0 win at on Saturday to reach another maximum cycle of yellow cards for this season.

As such, he will be suspended for next weekend’s home clash against Real Valladolid but more worryingly, it was his 50th yellow card in just four seasons (including this campaign) with Los Blancos, leaving him with one of the worst disciplinary records in the club’s history.

But on the pivotal victory against at the weekend which kept them in the title race, Ramos was satisfied with his weakened team’s performance.

“It was quite an even game in a very difficult ground against an opponent who is having a great season,” he was quoted as saying by Marca during his post-match interview.

“We had a lot of tired players after the international break, but in general, the team is doing good and those of us who did play did well enough.

“We do not pay attention to what are doing. The only thing we can do to win the league title is to win all our remaining games and wait for them to falter.”

Below is the list of ’s eight most booked players:


50 in 4 seasons bb? Eeesh... I bet if he played in the Premier League though, he wouldn't have half the cards he does :)

Hope you'll forgive the non-football-ness of this post,
but in the interest of being concerned global citizens as fans of this global sport,
I thought this deserved our attention.

More than 70 people were killed and the death toll was likely to rise, civil protection chief Guido Bertolaso said as rescue crews clawed through the debris of fallen homes. Some 1,500 people were injured.

The quake hit 26 towns and cities around L'Aquila, which lies in a valley surrounded by the Apennine mountains. Castelnuovo, a hamlet of about 300 people 15 miles (25 kilometers) southeast of L'Aquila, appeared hard hit, and five were confirmed dead there. Another small town, Onno, was almost leveled.
rest of article here

Lettuce keep the victims in our thoughts and prayers. I hope no one in

The latest reports from Sky News Italia report the rising death toll to be around 80, and 1500 people have been injured so far. Four children were killed by the quake, which struck early this morning and measured 6.3 on the Richter scale. The news has devastated Italy, and Prime Minister Silvio Berlusconi has declared a national emergency.

Tuttomercatoweb.com has reported that both Milan and Inter have promised to help the emergency operation in anyway they can. The Rossoneri have offered to donate funds in order to help with the rescue attempts while Inter have instructed a recognised fan club to help with funds and other matters.

Milan director Leonardo is quoted as saying on Tuttomercatoweb.com, "Milan will donate some of the funds raised from the Gulf Tour to the population of Abruzzo."

Thanks for the tag! :D

Cristiano Ronaldo has rejected renewed speculation that he is poised to leave Manchester United for Spanish giants Real Madrid in the summer.

Weekend reports suggested Real were set to make a £75m bid for the winger.

"It is always the same question," said Ronaldo ahead of Tuesday's Champions League tie against Porto. "I am happy here. I think it is the right club."

"We are still in three tournaments with a chance of winning them, and that in itself tells you Cristiano is at the right club, and he knows that," Ferguson said.

"I think he has settled down, his form has returned in the last few weeks and the goals are starting to come for him now. He could have had four goals yesterday [against Aston Villa].

"There is a sense of a big occasion about every game now. For players like Cristiano and the other top players in our team, they are now hopefully starting to go into overdrive."

Ronaldo's two goals against Villa on Sunday took his tally for the season to 20, as United returned to the top of the Premier League.He said in October that he made the right decision to reject the Spanish side last summer and that he expected to stay at United beyond this season.But in December, Real director Pedro Trapote was quoted as saying a deal for a transfer this summer had been struck.

However, in the wake of president Ramon Calderon's resignation in January, a new round of elections on 14 June are likely to see Real again linked with some of the world's leading players.

While Ferguson has consistently tried to dampen down speculation United might win an unprecedented five trophies this season, having already won the Club World Cup and Carling Cup, Ronaldo believes it is a distinct possibility.

"We are the best team in England," the Portuguese added.

"We have shown that by being top of the table. That speaks for itself. We respect all our opponents but if we carry on winning, we will win the title again.

"We have a chance to win everything this season.

"First we have to beat FC Porto. After that, we must carry on."

The Liverpool and Spain striker gave an in-depth interview to Spanish newspaper ‘La Razon’. Fernando Torres analysed the progress made by the national team since winning the European Championships last summer, talked openly about his boyhood team, Atletico Madrid, and spoke about Liverpool and the Red boss, Rafa Benitez.

I honestly only posted this because of that one line. It's probably not that funny, but I'm sick and delirious.

Anyone feeling certain that this year's UEFA Champions League trophy is heading either to England or Spain cannot have been following the progress of FC Bayern München and their outrageously gifted schemer Franck Ribéry. The French midfielder has a habit of making things happen for the Bundesliga titleholders and he has set his sights on winning Europe's leading club competition "as soon as possible".

Most HQs, with preview
( Collapse )

A lot of the leagues are still very, very close. (Spain and Italy are not in that set.) For the majority of the season I take it one match at a time, but April is when I start counting United's remaining matches and watching the form of those remaining clubs closely. Does anyone else have any end-of-the-season rituals?

Old trafford OTP y/y???
( Collapse )
cristiano is going to poison kiko so he stays the hotty of old trafford. maybe spike the sports drink? trip him down a flight of stairs? taint his foundation with poison?

Oh God. Remember Borat? We thought that died down after a while.

Sacha Baron Cohen has gone and done it again, with his new movie about a gay Austrian designer, Bruno.

Doesn't he bear a distinct similarity to one of our favorite BBs?

In a day and age where WAG culture and a footy stars’ celebrity alter-egos are half the game, it can be hard to please everybody. There are numerous events that an uber-famous footballer can attend on any given night, and it must be really difficult to choose where to suck down your free hooch and have admirers stare at you all night. And with so many playgrounds to play in — who needs to remember teammates, friends, brothers in battle, in this kind of fantasy land? Well I guess not Rio Ferdinand. And Wayne Rooney is making things even, girlfriend! (Snapping z-motion hand gesture).

Apparently Wayne and Rio’s relationship has been on the fritz ever since Rio and his girlfriend at the time, Rebecca, failed to show at Wayne and Coleen’s wedding in Portofino, Italy last June. This came after the pair formally accepted the invitation to the £5 million wedding-bonanza-spectacular and Rooney set up for a paid chauffeur to pick the couple up at their house and drive them to the airport.

Either the chauffeur drove into a ditch or Rio and Rebecca forgot about the wedding in their own self-absorption. I’m siding with the latter, as I assume we would have heard about a mangled chauffeur.

Regardless, the lady friend who Rio was too busy with that day to make Roo’s wedding is now the new Mrs. Ferdinand to be. The wedding date has been set and invitations are going out.

But Roo’s not having any of this, as he seems to keep this drama going for the long haul, bitches…

From The Sunday Mirror:

Wayne Rooney is to snub Rio Ferdinand’s summer wedding… because he is still furious his Man Utd team-mate missed his.

Coleen, who the Sunday Mirror exclusively revealed last week is three months pregnant, was particularly upset by their absence. Friends have revealed that even though Coleen is still close to Rebecca, Wayne has told her: “They didn’t come to our wedding, so we’re not going to theirs.”

Last night a pal said: “Invitations to the wedding are expected to go out soon. Rio suspects Wayne is likely to decline but he’s still going to send him one. It looks like he’ll be wasting a stamp.” Another friend added: “Wherever it is held, it will be no expense spared. Rebecca doesn’t like the limelight so there’ll be no exclusive magazine deal. But she and Rio have very good taste and guests can be sure of it being a spectacular event.”

Rebecca has stood by Rio despite him being exposed as a love cheat by the Sunday Mirror. Former air stewardess Lauren Alcorn, 27 - now engaged to BBC Crimewatch host Rav Wilding - told how they had a five-year affair.

Maybe Rio was with his flight attendant mistress when he missed Rooney’s wedding!?!

Ok i know that I sound like a bit of a loser.
But I was Google-earthing Stamford Bridge with the 3D option.
On the screen there was a photo of JT and Lamps.
I guess they're more than official now, it is approved by Google :P

yup this is true! give it a go if you want.