Today is Didier Drogba's birthday! He turns 31 today. Love him or hate him, he's one of the most talked about strikers in the EPL. Sometimes the Chelsea fans want to throw him into a meat grinder, sometimes we want to erect a huge statue outside Stamford Bridge in his honor. I myself have wanted to do both. And while I can't do that because he saved our asses yesterday, I at least owe him this. 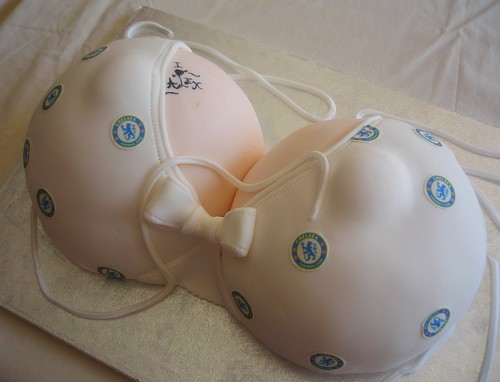 Ronaldo: I'd play in Italy because of the women

Manchester United star Cristiano Ronaldo continued the mutual back-slapping that has typified the build up to Manchester United's Champions League clash with Inter Milan by heaping praise on Italy for the quality of their football and the beauty of their women.

Right now the US is playing iSweden in the 1st place match at the Algarve Cup. You can folow it here
The US lost to Sweden 3-4 (of 7 rounds) in PKs.......pics tomorrow

These are the standings thus far

TORRES: WHY I AM SO PROUD

Fernando Torres spoke of his pride after Liverpool steamrollered Real Madrid - and labelled the 4-0 victory a 'big night for English football'.
El Nino opened the scoring as nine-times champions Real suffered their record European defeat in front of a raucous Anfield.

"This was a big night for Liverpool and for English football as well.

"We showed Real Madrid that this is Anfield and that Liverpool can win against any team here.

"It was a fantastic performance. After the first goal they knew it would be difficult because they had to score two. The penalty finished the game."

A Steven Gerrard brace and Andrea Dossena's first goal for Liverpool took the aggregate score to 5-0 following a 1-0 win in the Bernabeu two weeks ago.

Torres believes the tie was a tactical triumph.

"The plan before the game was to play with intensity and with a high-tempo," said the 24-year-old, who spent 12 years with Atletico Madrid.

"Spanish football has quality but it is slower, so we knew it would be difficult for them if we played with intensity.

"I think we prepared the game better than them. The boss was brilliant in explaining how to play against them."

The game saw Torres return from an ankle injury sustained in the first leg, and he wasted no time renewing his prolific partnership with Gerrard, who is now the Champions League's joint top goalscorer - alongside Miroslav Klose - with seven.

"Stevie made me the happiest player in the world on the night and got some more goals - I think he is the Champions League's top scorer now," said the Spain international.

"We want to stop our injuries now for Liverpool and for us."

The pair might have had more but for Real goalkeeper Iker Casillas - the man who keeps Pepe Reina out of the Spain side.

Torres said: "They have a fantastic 'keeper - one of the best in the world. Every time I play against him he is brilliant. The best Real Madrid player on the night was Casillas."

"We have to wait for the draw, but we have confidence now for the Champions League, and also for Saturday against United," added Torres.

"That is a massive game. I hope to win that and have more chances in the league. We know it's very important to win there - if not they will be many points ahead."

On his own fitness, the number nine said: "I feel good. My ankle felt a little bit painful in the second half but that doesn't matter in a match like this. We will work hard from Wednesday morning and I think I will be 100 per cent for Saturday."

While it was reported that Maradona would "keep the door open for Riquelme", Diego has now said that Román's decision saddens him, but Riquelme is absolutely off the team (this includes matches against Venezuela and Bolivia and the World Cup).

"I have a lot of players to think about and Riquelme was one of them, but now I've totally erased him from my mind" said Diego. (it sounds like they're breaking up, I love it).

Video of Román quitting yesterday on live TV. The journalists were actually trying to convince him not to quit and said stuff like "Why don't you talk to Diego?" It was pretty hilarious. For some reason they repeat the same statements twice on ths video, so no need to watch the whole thing.

Also, Maradona talking about Riquelme's decision in this video. It won't embed so go HERE.

You can already join a Facebook group called "Riquelme, thank you for quitting! You're doing us all a favour"

POSTING THIS EARLY BECAUSE I HAVE CLASS. GOOD LUCK EVERYONE

That is all!
edit: I lie


OhmyIkerfuck, an amazing match 'twas. Iker needs a hug, I freely offer my service. I died of happiness. Thumbs up to Iker for all those world class saves. Liverpool was amazing, everyone did their job faultlessly. Good game lads, good game! Let's hope we can kick them United's arses.

No one on planet earth enjoys more meaningless intercourse than Cristiano Ronaldo, but his mother is keen to dispel his reputation as a ladykiller.

Dolores Alveiro - who opened a can of worms when she supported her son’s poorly disguised desire to move to Spain - is quoted by German newspaper Bild:

“If I were to believe what other people say, he would have been with more than 100 women.

“When he likes a girl and it is serious, he introduces her to the family.”

Apparently, there are just two ladies to have had the privilege of meeting mummy - Merche Romero and C-Ron’s 2008 summer project Nereida Gallardo.