Actually I don't like Frank :-/, but thought it can be useful stuff for you, bbs

Ribery is under consideration at Juve as a replacement for veteran midfielder Pavel Nedved and Toni told Tuttosport: "Nedved is a great champion, but, in my opinion, Ribery is stronger."

"Franck is playing outside left for Bayern in a 4-4-2 system, the position he wants. Within a few years, he'll become one of the top three players in the world. He's a real phenomenon."

"It's normal for the big European clubs to follow him carefully. But if I were the manager of Bayern, I would not ever let him leave."

Toni also revealed: "He asks me a lot of questions about Italian football. He's also learning the language, but only so we can speak with eachother."

Franck learning some Italian so he can speak to Toni a bit better is just bloody adorable!

The Daily Star has taken a brief break from stories about Chanelle from Big Brother to tell us about Fernando Torres’ love of British television. In particular, he likes Dancing On Ice, and hinted that he would be interested in participating:

“The television in England is very good and there is a lot that I enjoy to watch.

“There is a programme called Dancing On Ice where a celebrity and a skater perform together. It is very artistic and elegant to watch. The couples move very gracefully together.

“Sometimes the celebrity will fall over, which can be amusing.

“But it must be very difficult. One day perhaps you may see me on the programme, too.”

Torres holds more than just a passing interest in the TV competition. Whenever he has to play on Sundays, he “makes arrangements to have it recorded.” By this, we can only assume that the striker is incapable of operating his own Sky+ box, and employs someone specifically for that duty.

It’s highly unlikely that Rafa Benitez would let Nando strain his delicate little hamstrings on the ice, so we will almost certainly have to wait until his career is over before we see him in a sequined leotard.
source.

Sergio "Kun" Agüero missed today's practice because his girlfriend, Giannina Maradona, is at the Clinica Montepríncipe de Boadilla, ready to give birth to the future of football their baby.

ETA: Infobae is reporting that Giannina gave birth to Leonel Agüero Maradona without complications. The baby wasn't expected for another couple of days, so most of her family is still in Argentina. Congrats to Kun and Giannina!
ETA2: Mr. Enrique Cerezo (President) and Mr. Miguel Ángel Gil Marín (Managing Director), on behalf of Club Atlético de Madrid and its social masses, would like to pass on their most sincere congratulations to Sergio Agüero for becoming a father. On Thursday afternoon, 19 February 2009, Benjamín was born in a Madrid hospital. The birth went normally and both the infant and his mother, Giannina Maradona, are in perfect condition.
http://www.clubatleticodemadrid.com/en/atleticoaldia/noticias.asp?id=3518
Thanks

c0rrine</lj>  for the info!
ETA3: Benjamín weighs 3,660 kilos. Both Kun and Diego were at the hospital with Giannina. Kun WILL be travelling to Sevilla to play on Saturday night. Maxi Rodriguez visited them at the hospital, aweeeee.

During last night’s UEFA Cup match in St. Petersburg, Jens Lehmann lived up to his billing as one of the maddest keeper on the planet.

Charging straight over to Boulahrouz, Lehmann ripped off the defender’s headband, turned back towards the advertising hoardings before angrily throwing the offending accessory behind his goal. For his part, Boulahrouz reacted like the proverbial rabbit in the headlights. (more)

Robinho builds a beach in his Cheshire garden

Brazilian football star Robinho is having a huge shipment of sand delivered to his home - to play beach soccer.

According to The Sun, the Manchester City forward, 25, has clubbed together with Brazilian team-mates Elano, Glauber Berti and Jo to create the pitch. The sand will be laid out in the grounds of his new Cheshire mansion. (more)

Wenger has now revealed that Eduardo could miss the next three matches against Sunderland, Roma and Fulham as he bids to comeback from yet another injury.

"He picked up a hamstring injury two minutes before I took him off. What a nightmare." (more)

Adriano Galliani, the AC Milan vice president, claims the Italian club have made progress in their attempt to turn the England midfielder's loan from Los Angeles Galaxy into a permanent transfer. "In the past few hours we have taken steps forward," Galliani said yesterday. Reports suggest the deal could be completed by Tuesday. (more)

Meanwhile, Galaxy fans back in LA have expressed their feelings on the issue during a friendly match against Japanese side Oita Trinita.

Andrei Arshavin doesn't trust British hair stylists to shave his locks - so he is flying in his personal groomer from his native Russia.

The Arsenal new boy doesn't appear to have the most sophisticated cut, but his wife Yulia has told the 27-year-old to bring over the guy who has been coifing his hair for the last two years in St Petersburg.

'We agreed that I'll fly over to London when necessary,' said stylist Denis Volkov. 'He's going to be very busy for the next couple of months and it's unlikely he'll have time to use my services in St Petersburg.'

Xabi Alonso admits he will cut a bitch frustrated figure this weekend when he watches Liverpool's clash with Manchester City from the stands.
Having collected five yellow cards so far this term, the Reds' Spanish midfielder will serve a one-match ban for the visit of Mark Hughes' men, who themselves go into the game having won just once away from home this season.

With Manchester United hitting top form at the top of the table, Alonso insists three points are a necessity against City - and he's hoping for a far less dramatic game than the one played out between the two sides earlier in the campaign.

"It's always frustrating to watch games from the stands but I have known for a while I was likely to miss a match at some point and it has to be this one on Sunday," he told Liverpoolfc.tv.

"The important thing is all our international players came back fit and also had some time off. It's important to have some time to disconnect during the middle of the season and now we can look forward to the game with Manchester City, which is going to be very important for us if we want to challenge for the title.

"Hopefully it won't be as dramatic as our game at City when we were two goals down at half-time. We had to play with a lot of belief in that second half and score three goals, which eventually we managed. This time hopefully it will be more comfortable.

"They are a good team even though they haven't got the best of away records this season, so we know we will be in for a tough match."

Alonso's absence could be tempered by the possible return of Steven Gerrard from hamstring trouble, although the Liverpool skipper is expected to start the game from the substitutes' bench.

"It's good to see Stevie coming back but we have to wait until he is one hundred per cent," added Alonso.

"It's not intelligent to rush him back. Whenever he feels okay he will be a big part of our squad again."

Uefa refuses to rule out Liverpool playing on Hillsborough anniversary

Uefa today refused to rule out the possibility of Liverpool having to play a Champions League tie on 15 April — the 20th anniversary of the Hillsborough disaster.
The Merseyside club asked Uefa earlier this week if the second leg of their quarter-final — should they progress past Real Madrid in the clubs' last-16 tie — could be brought forward from its currently scheduled date by 24 hours.
Liverpool traditionally hold a memorial service, which is attended by players and staff, at Anfield on the 15th to commemorate the 96 supporters who died as a result of the events at Hillsborough during the 1989 FA Cup semi-final against Nottingham Forest.
"We have received a request [from Liverpool] and we will try our best to accommodate it," a Uefa spokesperson said. "But we cannot guarantee at this stage that we will be able to."
Three years ago, the Premier League moved Liverpool's encounter with Blackburn after it had originally been scheduled to take place on 15 April.
www.guardian.co.uk/football/2009/feb/19/liverpool-uefa-champions-league-hillsborough

Also, now I know how to an LJ cut, but I don't want to mess with my videos to do that, so meh.
Like all World cups, controversy is a staple, we can't please everyone, but this is just for fun.

Barcelona midfielder Andres Iniesta has been sidelined for 15 days with a thigh muscle strain, the Primera Liga leaders said.

The Spain international will miss Barca's Champions League first knockout round first leg away to Olympique Lyon next Tuesday, and the league fixtures at home to city rivals Espanyol and away to Atletico Madrid.
source

Xavi says Madrid has no chance in hell at winning the league, r u listening Boluda? and laments the absence of his favorite glow in the dark midfielder 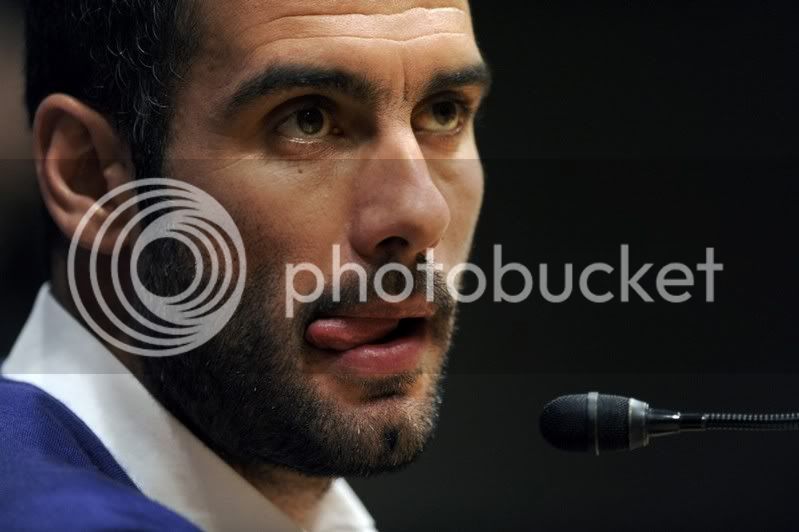