This article's from December of 2007 so it's a bit old, but I think it should be posted for the world to see how great Fernando Llorente is, and to explain that he really isn't new to "fighting" for Spain. :)

[And because I'm totally obsessed with him right now.]

Winning with Athletic is something unbeatable"
Fernando Llorente (Pamplona, 1985) is finding with Caparrós the confidence denied him by previous trainters. He has everything to be the offensive reference for the "leones".

Juventus captain Del Piero has scored 5 goals this season on set-pieces
a goal.com poll has voted him as the best free-kicker

His presence with the "Roja" is fundamental for the underdogs to triumph. Marcos Senna was the quiet hero of the Eurocup, but as he says, "to do it simple is at times the difficult thing". The best player of the league 07-08 acknowledges that what he found in Spain and in the Selection is priceless.

*any mistakes in translation are mine. I'm trying to practice and get better at it, but I'm not quite there yet, so forgive me.

Hallo my cescy little munckins!
Welcome to the Wacky Wenger Wednesday edition of

Today, we are treated to an intimate peek into the life, love, and work
of our beloved Red Captain.

Highlights include (but are not limited to):
+ reflections in the CL aftermath on the Chelsea saga
+ giggling with his adoooorable daughter, Lilly-Ella
+ a tour of his kitschtastic luxuriously furnished pad
+ finally understanding where this video originated
+ he and his nailtech bride telling of how their courtship blossomed

Shall we get started?

Steven Gerrard: A Year In My Life

Bone-Us: Xabi on his team mates
From 4th October 2008: Each week Soccer AM asks players to dish the dirt on their team mates. This week it's the turn of Liverpool and Spain midfielder Xabi Alonso. The Kop favourite was rumoured to be heading for the exit door at Anfield this summer, but stayed at the club after to the delight of all the supporters. He took time out this week to tell us what his fellow players are really like ( Collapse ) 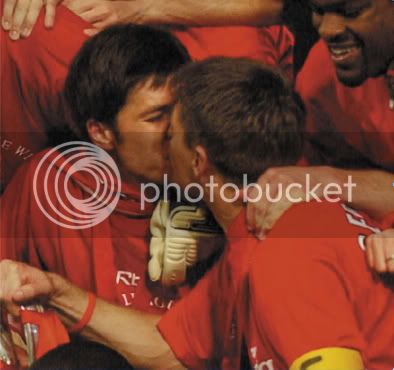 ♥
- - - - -
Eempordant Edit: Do feel free to share your favourite Stevie videos in the comments! Yay!

People say that in life nothing falls from the sky, but for Messidona anything can happen.
(and yes, i only post random things XD)

It's the moment we've all been waiting for!


Will Jogi put differences aside? Will England... show up? FIND OUT IN TEN MINUTES.

torisaurusrex is going to introduce you to two of the Danish lovelies sometime in the near future, but school's a bitch, innit? For right now, I am taking on the responsibility of introducing you to two Welsh lovelies:

I love you all, so I am just letting you know:
1.) There are a lot of fotos, so this isn't very dial-up friendly.
2.) If you hotlink, I might have to send Jens after you.

The owners of Liverpool Football Club have applied to register the Liver Bird as their trademark, prompting the city council to take legal advice.

The club has applied to the UK Intellectual Property Office to register the image for £450.

But Liverpool City Council said the club had "no right" to claim the bird as its own.

"I have some very real concerns over it," she said.

"They do already have their crest trademarked, but they have no right of ownership to claim the bird, or any version of the bird, as their own.

"The Liver Bird, not only does it appear on the Royal Charter for the council, but it is also used by local businesses and schools.

"It belongs to the city and nobody has a right to claim it exclusively as the own. It's a symbol for the city."

She has also raised concerns that if the club was successful in registering the image, it could start charging for its use in future.

"The club also says they have no intention of charging organisations that want to use it.

"But there is no guarantee in future that the people of the city will have the right to use that without having to pay for it."

A statement from the club said: "Liverpool Football Club is seeking to trademark only its own specific version of the Liver Bird, to combat its use in counterfeit merchandise.

"This does not extend to other versions of the Liver Bird, such as the city council's or those used by other commercial or charity organisations.

"We have absolutely no intention of challenging that usage of the Liver Bird.

"We are simply trying to stop people lifting our rendition of the Liver Bird out of the official club crest and applying it to fake Liverpool FC merchandise."

The Liver Bird is a mythical bird, similar to a cormorant, which as legend has it could often be seen flying alongside the River Mersey with seaweed in its beak.

Two statues of the birds stand atop one of the city's most famous buildings, the Liver Building.

The bird is also used on logos by several businesses, including the Liverpool Echo, which shows the bird carrying a newspaper in its beak.

I find this dumb, but I'm not a Liverpool fan. What do you guys think?

It was a rainy (again) 50 degree night whilst Germany and England took the pitch.
( Collapse )

TIME TO SHOW OFF MY BABIES.
LOLNOTDIALUPFRIENDLY.