Yesterday was a spotlight on Fenerbahce, and today is the time for my boys from Galatasaray. Glad to see people enjoyed the first post, so hope you guys like this one too! Galatasaray are from the European side of Turkey and the historic rivals of Fenerbahce. They are the only Turkish team to have won the UEFA Cup (in 2000 against Arsenal), and the only one to reach a European Cup semi-final (in 2000 against Real Marid).
Oh, and their fans like to use flares... A LOT.

Some interesting history: Galatasaray was founded in 1905 by the elite Galatasaray High School. They adopted their name as the 'Galata Sarayi,' which means 'Gentleman of City Palace.' At first, the colors of the Galatasaray Sports Club were red and white. But because the Republic of Turkey wasn't founded at the time, these colors had revolutionary implications and were thus repressed. So, the colors were eventually changed to red and yellow in 1908. The first president (Ali Sami Yen, who the stadium is named after), famously stated that the red fire of the team would carry them from one victory to another... and hence those always present red flares.

Their followers call them 'Cim-bom' (really has no meaning, just easy to chant) and 'Aslanlar' - the Lions.

Galatasaray are also known for their youth rank (I myself attended one for swimming). Although this doesn't really hold anymore, the clash between Galatasaray and Fener also developed under pretensions of elite v. working class.

Arda Turan (captain): Known as the 'Golden Boy' of Turkey. At 22 years old, he already has over 30 senior national caps and five goals. After Euro 2008, he was ranked 8th in the 100 Best Young Football Players in the World, which was published by Spanish magazine Don Balon. He's been linked with moves to Arsenal, which I doubt cause he's too old.

Oh, and the Turkish media likes to stalk him.

And apparently people on social networks...

Elano: Brazilian international who previously played for ManCity, noted for his long-range scoring and dribbling skills. An attempt to tease Fener, since they have like 35 Brazilians and love signing more. He was greeted at the airport by 1,300 fans.
Poor guy was probably not expecting this.

Baris Ozbek: don't know. I just wanted to post pictures of him and Ozil.

That hair is going to hurt someone.

This one came up and I just had to post it. Keita and vintage Eto'o. 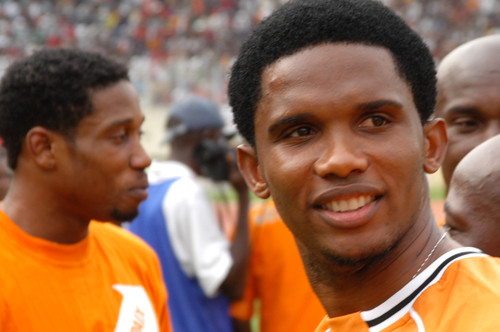 Milan Baros: OH boy, should I even bother writing about him? He scores a lot of goals for Galatasaray, THERE YOU GO. And he's always in a scandal. Never ending cycle.

Shabani Nonda: DRC international. Scores a lot of goals too. Plus, I like this picture.

Emre Asik: His last name means 'in love' in in Turkish, so he deserves recognition either way. He was the guy who's head was almost always in bandages during Euro 2008. Loooooove him.

Servet Cetin: is a brick wall. Fans refer to him as ayıboğan which literally means, a man who could choke a bear. Yea, he's kind of scary. He's also known as 'Bionic Servet' because he kept playing during Euro 2008 despite his injuries, which included a torn groin, strained knee ligaments, a broken tooth and a bruised hip bone ALL AT ONCE. After his cheekbone broke and he had to wear a mask, they started calling him 'Terminator Servet.' Yea, I say it's appropriate.

Hakan Balta: Okay, I love him, not gonna lie. His nickname is the refrigerator. I don't know why, maybe cause he never talks. He's an incredible left-back and really helped the Turkish national team during Euro 2008.

Last, but certainly not least, Harry Kewell: (OMG, FANGIRLING. <333) Okay... Australian international, etc. etc. He's good-looking and is absolutely incredible at Galatasaray. Has to stop getting injured though. PLEASE.

YOU KNOW YOU LOVE HIM.

The boys are too busy to approve this post.

This post was brought to you by borek and lahmacun. Go eat them; they're so good.